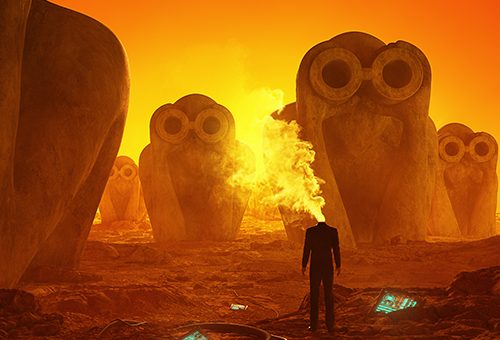 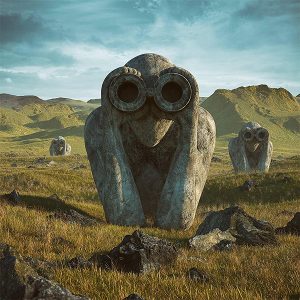 ‘The Watchers’ is the opening of the album. The track symbolises these creatures which certainly might seem familiar to a few people. They were looking at us from the cover of the first ‘Equinoxe’-album. In this movement of the new album they are reappearing and we still don’t know what they are about. Now they rise again and we discover that they may be from a very ancient past, wet and windy… But they are also timeless and we can feel that they could still be here after we have gone. The track is like the first scene of a movie of which we still don’t know how it will end.“

” ‘Flying Totems‘ are linked in some way with what we call crop circles, these mysterious signs that were found in South America and in some other parts on Earth or under water, these very, very big drawings in fields or deep in the ocean that you can only see from above. Clearly, nobody has ever really been able to find out whether all of these signs were actually made by human beings. The Watchers may have come from outer space and they may be linked to these signs. The Watchers from the first cover are almost looking like the statues from Easter Island. They look like totems that people could actually adore. But they might have also come from outer space. So, at one point in their existence, they might have been “flying totems”.“

“I love oxymorons, made of two opposing words, two opposite feelings. This track is a mirror of that. I use the Mellotron a lot in this piece, such a great instrument, a mechanical device but with a human quality VR eating sounds like some audio remains of the past. I recorded this track only once, I did everything – the melody and the rhythm-track – in one go. I love the idea that technology can provide emotion, even though technology is not linked to the notion that it can actually provide emotion. Robots or Artificial Intelligence are just machines without any contradicting emotions so far.. They might not be able to work as efficiently should they have emotions.But who knows, one day maybe, Robots will experience nostalgia..

ALL THAT YOU LEAVE BEHIND

” We all know that any human being often thinks about what she or he is going to leave behind, when they are gone. Depending on the listener this can have a different meaning. What’s left of us? Children, objects, inventions, mistakes, dreams, chaos, ideas..? Also will we leave behind us a clean green and blue planet like on cover 1 or a polluted hell created by us, like this smokeman in a suit on cover 2 ? What are we going to leave behind for the future from the 21st century? Ideas and acts have resonance from one generation to the other. The central creatures in this
project, the Watchers, are perhaps just observing which future we are building.“

IF THE WIND COULD SPEAK

“Technology and Electronic Music can convey a lot of romance and a lot of poetic elements. The difference between songs with lyrics and instrumental music, is that instrumental music actually invites itself very well into themind of the listener as it is not telling you a specific story. The listener can imagine his own story, his own movie in his mind when he listens to instrumental music. The listener’s own creativity is very much welcome. In this movement of the album, the music is carried by the wind travelling through some chaotic aquatic sounds on an imaginary path from left to right. Where is it coming from and where is it going ? If the wind could speak..“

“With ‘Infinity’ I wanted to create a bridge, a connection with the first ‘Equinoxe’ album with a piece of music that is rather joyful, just like ‘Equinoxe Part 5’ was. It’s easy to be dark, I always thought it is always more difficult to create joyful music which had a certain kind of hidden melancholy attached to it. Parts of the first ‘Equinoxe’ album were like that. When I worked on this piece of music, I was thinking about these timeless Watchers looking at us in a virtual reality environment, us trying to survive in a hectic VR game with no real beginning and no real end, trapped in a world of « infinity ».

Machines are observing us and are learning random information about us humans, the remains of our history, of our obsolete technology, language and dreams.. For which purpose ? We don’t know yet…

“I first composed this track for this album, before I played it at the Coachella Festival in the summer of 2018 : I thought that this piece would be a great opening-track for my festival-appearance and for my US-tour. Actually, that led me to work on the live-version before I recorded the studio-version with a different approach. So, both pieces are related to each other, but they are not exactly the same. For the studio album I went back to my original idea,which is kind of a momentum where a huge gate is opening onto something & somewhere else – Watchers opening doors onto virgin territories, the future being virgin territory for us. ‘The Opening’, was never meant to be the opening for the album but more as a passage to a next stage.”

“I started this piece with quite a simple idea. I had in mind the image of travelling on an endless road. This journey could last an entire life. It also conveys the simple idea of being able to leave the past behind in order to build the future, having learnt from the past. Once you gained knowledge from the past, you can look into the future, you don’t need to look back.”

“When I received the Stephen-Hawking-Medal last year, Professor Hawking shared with me that he believed that there will come a time when we will have to leave Earth for another planet, if we want to survive. I like the idea of us becoming gypsies of time and space, moving somewhere else in order to survive, just leaving some audio information behind us on our way to find a place to live better nights and days, on our way to find ‘Equinoxe Infinity’.